"I don't care what happens to this world! By defeating X, I validated my own existence, and that's all that matters to me now!"
—Vile

Vile (VAVA (ヴァヴァ), Vava?) is an antagonist hailing from the Mega Man X series. He used to be a Maverick Hunter prior to the first Mega Man X game and was ranked S-A Class in Sigma's 17th Elite Unit prior to his commander's rebellion against humanity. He appears in the sequel as Vile MK-II (VAVA MK-II（ヴァヴァマークツー), Vava Maaku Tsuu?), his design from Mega Man X3.

Vile was originally an A-Class Maverick Hunter, though during his career he racked up disciplinary charges for unnecessary force, excessive violence, and endangering his teammates than any other Hunter in history. It even reached the point where other Hunters were afraid of being put on a mission with him, due to his recklessness and outright bloodthirsty tactics. When Sigma turned Maverick and took many of the best Hunters with him on his war against humanity, it was no surprise that Vile followed him willingly. Though his favorite tool in battle was Ride Armors, even on his own he was a powerful Hunter.

He was thought to have been destroyed by Zero and X during the first Sigma Revolt. Zero sacrificed himself to destroy Vile's Ride Armor, and X defeated him in single combat. Ultimately, both Reploids' remains were recovered from the wreckage of Sigma's base and rebuilt by Maverick agents.

Vile was not heard from again until the Dopple Town incident a few short years later. Under the control of Sigma, the benevolent Dr. Doppler rebuilt Vile into a more powerful form. Vile's sole drive then was the destruction of X and Zero. Even backed by his new, high-powered Ride Armor "Goliath", Vile fell again to X. Unfortunately, recovery teams sent into Dopple Town after the riots were unable to locate Vile's remains.

Vile was once again re-activated to serve as a lackey for Sigma's (and indirectly Lumine's) plan. In this iteration, he was upgraded once again, donning a new design and more powerful weaponry. He engaged X, Zero, and Axl on several occasions, each time losing until his final defeat. However, he is not seen getting destroyed in the game's "Hard Mode", which contains the full ending.

A Reploid who was formerly a member of Maverick Hunter unit 17, making him an ex-comrade of X and Zero.

Although he was an A-rank, top class Hunter, he was also arrogant and violent, and his destructive tendencies often led to tension with those around him. When X's superior Sigma finally launched his revolt against humanity, Vile took the opportunity to leave the unit behind.

He sought to exhibit his strength by defeating X, who is said to represent the true potential of Reploids. After several fierce battles, X destroyed him, but he was rebuilt and enhanced by Dr. Dopple, a scientist-type Reploid who had turned Maverick. Now, burning with resentment toward his earlier defeat at the hands of X, whom he considers an inferior, he tirelessly pursues his chance for revenge.

His old Ride Armor was a modification of a construction machine, but the Goliath was created specifically with combat in mind. It is as massive as a giant, just as the name suggests, and is also equipped with vicious needle claws on each arm. It attacks by putting its full weight behind each blow.

Vile makes his debut in Chapter 20: The Maverick Hunters, where he is summoned by Due Flabellum, following her explanation about what has happened with the boundaries, but is confronted by X and Zero. Vile is surprised that Zero now holds the position as the Maverick Hunters' commander and reveals he has been revived to continue his relentless ambition to defeat X. After his defeat, he retreats from Cyberspace.

Later, he reappears in Chapter 27: The Dimensional Cliff in the Geo-Fortress, along with his Ride Armor. He used the fortress to repair the Ride Armor and download his data to rebuild it every time it was destroyed. The truth behind his revival isn't revealed until Chapter 29: An Unbeatable Love, where it is learned his resurrection came via the Feydoom's power, succumbing to his negative emotions toward X for killing him twice in the past. When Iris temporarily revives in The World, he takes advantage of Zero's anguish to weaken him and paralyze him. However, Zero was able to recover thanks to the efforts of the others. After his defeat, Vile retreats from the server. He is last seen in Chapter 37: A Familiar Future, where he is defeated.

Vile appears in Project X Zone 2 in his Vile MK-2 body from Mega Man X3, where he makes his first appearance in Chapter 7: Going Commando, appearing in Cyberspace after X and Zero arrive, though they were surprised to see him alive again. He tells X that this is the beginning of the changing of the worlds He resumes his conflict with X and Zero but is defeated, which he says is because his body isn't functioning at its full capacity and he needs more adjustments. Nevertheless, he tells X that their fight has only just begun before retreating.

Vile's second appearance is in Chapter 14: Renaissance of Fate, appearing in Cyberspace with his Ride Armor: Goliath. Much like Solo and T-elos before him, he received intel from Sylphie that the heroes had arrived in Cyberspace and came to confront them with his new Ride Armor that he wants to test. Sadly for him he is defeated again and Goliath is destroyed, though he doesn't mind since he can recreate it anytime he wants. Afterwards he retreats.

Vile's third appearance is in Chapter 22: The Demons Within at the ruins of Tarqaron, having been provided passage by Sylphie, who also rebuilt Goliath. He also reveals to have aligned himself with M. Bison. He doesn't join in the battle until after M. Bison's control over Estellise is broken and Zagi arrives on the scene, where he tempts Zagi to join their side with the notion that he will be able to satisfy his 'demon'. After he is defeated, he tells X that the next time they meet, he will be able to fulfill his desire for revenge.

Vile's fourth appearance is in Chapter 27: A Summation of Malice. He appears in Cyberspace having lured Dokumezu and Ranmaru to it with intel regarding the golden chains. he also reveals that his body is filled with AIDA, which he has been collecting, and that he had been waiting for Sylphie to arrive, who provides him with Goliath which he quickly equips. As a result of the dimensional energy she ended up supplying, in addition to the AIDA he collected and the golden chains, he is able to revive Sigma, though he quickly tells him that he only did it to make X and Zero suffer from his presence. Despite being defeated, he says he got what he came for with Sigma's return and he will get his revenge in his own way before retreating.

Vile's fifth appearance is in Chapter 35: Justice Enforced, where he appears alongside Kamuz at the Divine Dragon Grounds, though he reveals that he wants to see if Sigma can put the Golden Seed to good use and toys with Kamuz if he himself feels he can't use its power properly. He also reveals that he has been waiting for X and Zero to arrive. When Chrom's group arrives, he sees that X and Zero aren't with him, though Chrom's call for reinforcements allows X and Zero to arrive, much to his delight. After he brings forth Kurohagane α, he reveals that he plucked him from Cyberspace through a portal. Zero asks what he will do when his world breaks and retorts nothing, for all he cares about his his revenge. He equips Goliath again and fights the heroes but is defeated and Goliath is destroyed again. He tells X that his body isn't going to last much longer but he plans on meeting him at the location of their final showdown as he flees.

Vile's sixth and final appearance is in Chapter 41: The 101 Embryo Plan, appearing on the unknown island with a rebuilt Goliath, which he says is the focal point of where all the worlds will crumble, and where he plans on destroying X once and for all. After he is defeated for the final time, He tells X that there is a demon within him and it will destroy him with or without his help as he explodes.

This article is a stub. You can help Project X Zone Wiki by expanding it. 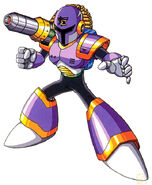 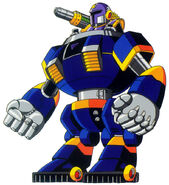 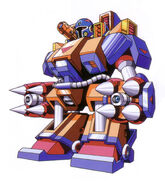 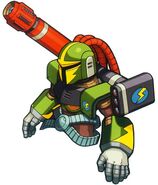