Project X Zone Wiki
Register
Don't have an account?
Sign In
Advertisement
in: Capcom, Devil May Cry, Playable,
and 4 more

Vergil (バージル, Bājiru?) is a major character in the Devil May Cry series and is a playable character in Project X Zone 2. He first appears as Nelo Angelo, his corrupted Devil Trigger form in the first game, prior chronologically appeared in Devil May Cry 3 as an ordinary Vergil, where he was the final antagonist there. Besides the original Vergil being a playable character, his corrupted DT form, Nelo Angelo appeared as a boss.

It was revealed that the Vergil we saw in this game is a time-displaced version of himself, and quickly join the heroes once he sees his corrupted future-self and realize that his search for absolute power is already at his peak.

Dante's twin older brother and, like him, a demon-human hybrid. Having witnessed his mother's murder at the hands of a demon and experienced the bitter torment of powerlessness, he now dedicates himself exclusively to the pursuit of pure power. Cold and inhumane, he will stop at nothing to achieve his goals.

In his search for power, he climbed to the top of Temen-ni-gru and unsealed the door to the Demon World. There he fought many times against Dante, who seeks to destroy all demons. Since he was chosen to live as a demon, he eschews mortal weapons and refuses to use human-made guns.

A master of the art of iaido, his sword skills are greater than Dante's and in one instant, he can close with his foe and unleash lethal damage.

His them is a remix of "Vergil Battle 3", the theme of the final battle of Dante and Vergil

Vergil's mainstay of attacks come from his Yamato katana, and will also call upon his Summoned Swords and occasionally his own Devil Trigger. He's partnered with his brother Dante. 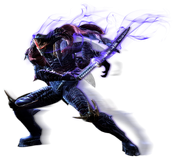