Start a Wiki
Tiki (Japanese: チキ Tiki) is a reccuring character in the Fire Emblem series and a NPC character in Project X Zone 2.

An Archanean manakete and the last of the divine dragon clan, and the daughter of Naga. In her infancy, she was sealed asleep by Naga before her death to prevent her from degenerating along with the rest of the dragonkin. She was later awakened by the fire dragon Bantu, who travelled the world with her, and during this time she befriended and allied with the Hero-King Marth. As an adult, millennia later, Tiki dwelled in Valm and acted as the Voice of the Divine Dragon, an oracle to Naga.

She has lived for thousands of years and even once fought as a friend alongside the Hero-King Marth. She is intelligent and thoughtful, but she can also be prone to curious leaps in logic, as well as sudden bouts of sleepiness. Her foul moods upon being awakened have become the stuff of legend among the rest of the army.

She joins Chrom to restore peace using the power of the Fire Emblem, a treasure of the Halidom of Ylisse that is said to be able to grant wishes.

Mystery of the Emblem 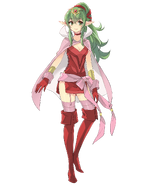 Fire Emblem Heroes
Add a photo to this gallery
Retrieved from "https://projectxzone.fandom.com/wiki/Tiki?oldid=18781"
Community content is available under CC-BY-SA unless otherwise noted.