Tarosuke (たろすけ?) is the protagonist from the game Yokai Dochuki. He appears in Project X Zone 2 as an NPC.

In his origin game, the player controls a boy named Tarosuke, who travels through "Jigoku" (the Japanese concept of Hell) fighting off "yokai" (mythical Japanese monsters) on his way to his final fate, as determined by Buddha. He destroys his enemies by firing small Ki bullets, which can be charged to increase their power; however, if overcharged, he is left unable to move or fight for a few seconds. During boss battles, Tarosuke kneels at a shrine to Buddha and prays, summoning "Monmotaro" (not to be confused with "Momotarō"), a spirit which floats in the air and drops energy balls on the boss and any lackeys he has. Once the boss is defeated, Tarosuke goes to the next stage. He previously appeared in Namco x Capcom, where he teamed up with Taira no Kagekiyo from Genpei Tōma Den.

A young boy who took a trip through hell while still alive. He was sent there as punishment by God, to be judged by the King of Hell for all the mischief he caused.

While he still maintains a naïve, childish side, he is also a bit wild and something of a letch, always trying to get it on with Otohime and any other pretty girls who come along.

When fighting with the "yokai" monsters he encountered during his travels through hell, he unleashed Ki bullets using his mental powers and also called forth his guardian ancestor Monmotaro to attack. 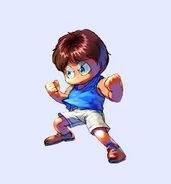 Namco x Capcom
Add a photo to this gallery
Retrieved from "https://projectxzone.fandom.com/wiki/Tarosuke?oldid=18798"
Community content is available under CC-BY-SA unless otherwise noted.