Strider Hiryu (ストライダー飛竜, Sutoraidā Hiryū?) is the main protagonist in the Strider series and is a playable character in Namco X Capcom and Project X Zone 2.

A top class agent and member of the futuristic Special Forces group "Striders". A true professional who lets nothing stand in his way, he shows no weakness and is cold enough to eliminate any obstacle that may stand between him and his mission.

Receiving orders to assassinate Grandmaster Meio, who planned to take over the Earth by killing everything alive on it and replacing them with creatures of his own design, Hiryu arrived alone at Meio's base, an artificial city called "The Third Moon", and carried out his mission.

His primary weapon is a light sword called the Cypher that uses plasma particles and can slice through anything it hits.

Also, the sickle he carries on his back, the "Climb Sickle", doubles as a climbing tool that he uses to scale walls.

He has been a fighter in every entry of the Marvel vs. Capcom series with the exception of Marvel vs. Capcom 3 He also appeared in Capcom Card Fighter. He made a cameo in Street Fighter Alpha 2 in Ken's stage and in Mega Man Legends.

Hiryu uses his Cypher blade to cut down his enemies, and he also employs his robotic animal Options. He also uses some of his signature fighting moves, including Savage Slash, Vajra and his signature finishing move Ragnarok. He is partnered with Hotsuma from Shinobi.

His theme is a remix of the first stage of Strider, known as "Raid!". 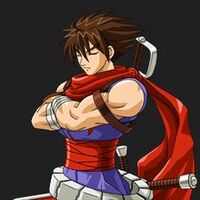 Hiryu with his scarf down (Namco x Capcom)