Shielder (シールダー, Shīrudā?), also known as the Statue of Terror, is an antagonist from the Ghosts 'n Goblins series and is the first boss of Ghouls 'n Ghosts. He appears as a boss in Project X Zone, only appearing in chapters relating to the Makai, or in the game's case, the "demon world".

Evil statues that stand sentinel over doorways in the Makai. Appear as monsters clad in armor. Although they normally look like regular stone statues, drawing near to the portal which they guard will cause them to start moving. They hold their head in their hands to target and attack by spitting fire from their mouths.

The Shielders make their debut in Chapter 14: Eternal Rivals in Randgriz Castle as Boss Unit. The Shielders are Astaroth's minions who will not let anyone go to the Makai, one of these Shielders attacks the heroes, but is defeated. Another Shielder appears in Chapter 15: The Gain Ground System along with some Red Arremer Aces, but is taken down.

After his debut, the Shielders appear as high-ranking Astaroth's minions in Chapter 17, 28 and 39, where they are destroyed for the moment, along with the two Astaroths in the Majigen. All three of those chapters have encounters with two Shielders instead of the one in the first two encounters. A Shielder clone appear in Final Chapter: The Winged Wanderers created by Fused Meden, along with the other bosses. He appears in the first wave of clones bosses alongside Lord Raptor, Seth, Vile, Nemesis, V-Dural, the Prelude, Dokugozu, Dokumezu, and Phantom. 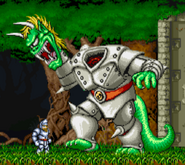