Start a Wiki
Shadow is a major villain from Space Channel 5: Part 2 and a boss in Project X Zone 2.

Shadow is the group leader of the Rhythm Rogues in Space Channel 5 Part 2. He continually taunts Ulala and is always seen either personally battling her or introducing her to a boss of a report. In "Report 5: The Spies Get Revenge!", once defeated, he reverts back to his human form, and is revealed to be none other than Jaguar, the reporter of the Space Pirate Broadcasting Station and the man who saved Ulala when she was young.

Field captain of the Rhythm Rogues, a mysterious dance group. He was given a mission to make everyone dance on command, and thus he attacks with his army of robots.

He loves to show off his sweet dance moves with a hip, cool demeanor.

His boots are equipped with handy jets that allow him for precision dancing even during flight.

His mask keeps his true identity an impenetrable riddle.

Shadow doesn't actually fight himself, rather he summons his Rhythm Robots to attack the characters while he executes dance moves.

His theme is a remix of "Let's Shoot and Rescue!" from Space Channel 5: Part 2. 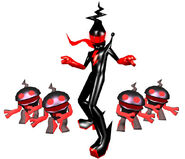 Shadow poses with the Rhythm Robots

"We are known as the Rhythm Rogues~!"
Add a photo to this gallery
Retrieved from "https://projectxzone.fandom.com/wiki/Shadow?oldid=18272"
Community content is available under CC-BY-SA unless otherwise noted.