"I am Sänger Zonvolt, The Sword That Smites Evil!"
—Sänger

Sänger Zonvolt is a video game character in the Super Robot Wars series. In both the Alpha and Original Generation timelines, he pilots a mech called Dygenguard.

Sanger first appeared in Super Robot Wars Alpha Gaiden as the guardian of the Earth Cradle, an underground fortress built to protect humanity in a dark future where the Earth had been devastated by the aftermath of a heroic defense against a massive swarm of Space Monsters (from the anime Gunbuster). He begins the game as an antagonist, serving the supercomputer Magus Mundus until he realizes it is not carrying out the will of Sophia Nate, a dear friend who was fused with Mundus. Sanger would later appear in Alpha 2 and Alpha 3 as a possible protagonist and supporting character, respectively, fighting to defend Earth alongside heroes such as Koji Kabuto, Amuro Ray, and Guy Shishioh.

In the Original Generation Timeline, Sänger Zonvolt began as a member of the Aggressors unit, an elite group of pilots formed by the Earth Federation Army with other notable members such as Elzam V. Branstein, Gilliam Yeager, and Kai Kitamura .

When the unit was disbanded, Sänger was relocated to the North American Langley Base and formed the ATX Team. When the Divine Crusaders led by Bian Zoldark declared war on the Earth Federation, he was convinced to join them, especially since his old friend Elzam also asked him to join. As a result he chose to leave the ATX Team and join forces with the Divine Crusaders, fighting once more alongside Elzam.

As a member of the faction, Sänger upheld the more honorable intentions of Bian Zoldark and seemingly understood the point of Bian's rebellion: it was supposed to strengthen the forces of Earth and prepare them for an impending invasion by alien forces. This dedication to valor often caused Sänger to clash with another high-ranking soldier, Siebel Mistrel, whose methods were far more aggresive and brutal, such as trying to kill his enemies with poison gas or making the threat of gassing a space colony.

Both Sänger and Elzam join the Earth's forces in time for Operation: SRW, the final battle against the Aerogater invaders before going their separate ways. He and Elzam retreat into hiding, waiting for the opportunity to reveal themselves again when a new alien threat would arrive to terrorize the people of Earth. As expected, in Original Generation 2, both the mighty Inspectors and mysterious Einst appear. Sänger and Elzam, under the disguise of Rätsel Feinschmecker, immediately rush to join their old allies in the battle against the aliens as well as the Neo Divine Crusaders and Shadow-Mirror. Upon arriving at the Tesla Leicht Institute to free it from Inspector occupation, his Grungust Type-3 is torn apart by the Inspector Vigagi and his Galgau, but shortly after, he acquires Bian's last gift to him: the incredible Dynamic General Guardian, which he shortens to Dygenguard.

Upon learning of Dr. Sophia being in danger, Sänger participated in the assault on the Earth Cradle, which was defended by Shadow-Mirror officer Wodan Ymir, his alternate self from a parallel world. Sänger came out of the duel as the victor, successfully completing his mission and destroying the core of Magus, freeing Sophia from its possession. After the war against the Shadow-Mirror, Einst, and Inspectors was over, Sänger chooses to hide in the shadows once again along with Rätsel, Yuuki Jegnan, and Ricarla Borgnine aboard the Kurogane.

A member of the crew of the all-purpose battleship "Kurogane," and the exclusive pilot of the humanoid mobile weapon "Dygenguard." He was formerly a member of the Aggressors, a unit that created combat motion data for Personal Troopers. He is a true warrior with a bold personality who stands by his beliefs. Sänger is always respectful and attempts to resolve things in a fair and just manner, but can sometimes be inflexible. Also a master of the Jigen Style, he is just as skilled with a blade in person as he is when piloting Dygenguard.

Aside from an elite mecha pilot, Sänger is also a trained swordsman. His mecha usually have a motion-tracking system to allow him to fight using his own sword skills in battle. Because of this, he usually prefers to use a sword in combat, often in spite of any on-board weaponry the mecha may have.

The Type-3  Sanshiki Zankantou used by the Dygenguard can alter the shape of its blade, and usually takes the form of a katana or a giant two-handed sword. In Project X Zone, Sänger's katana is blessed by Kaguya Nanbu in preparation for battle by turning the katana into the Zankantou.

He appears in the first trailer of Project X Zone alongside other characters. For canon appear, he first appears in Prologue 3: The Swords That Smite Evil, reappears in Chapter 12: Fury Sparks as an enemy's boss and joined as solo unit after Yuri and Estelle beat more than half of his HP.

He's also the first Super Robot Wars Original character to be introduced in the game. Unlike in the Super Robot Wars series, he doesn't pilot a mecha, but instead fights with a human-scale version of his mech's sword, the Type 3 Sanshiki Zankantou.

His themes are The Sword That Cleaves Evil from Super Robot Wars: Original Generations. 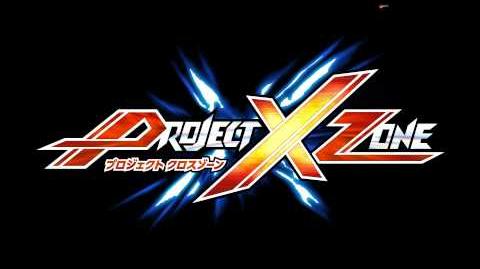 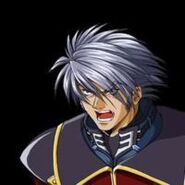 Teaming up with Kite and Blackrose 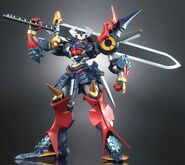