Ryo Hazuki (芭月涼, Hazuki Ryō?) is the main protagonist of the Shenmue series and a playable character in Project X Zone 2.

In 1986, Yokosuka, Japan, teenage martial artist Ryo Hazuki returns to his family dojo to witness a confrontation between his father Iwao and a Chinese man, Lan Di. Ryo intervenes, but is easily incapacitated. Lan Di demands Iwao give him a mysterious stone artifact known as the dragon mirror. When he threatens to kill Ryo, Iwao tells him the mirror is buried under the cherry blossom tree outside. As Lan Di's men dig up the mirror, Lan Di mentions Zhao Sunming, whom Iwao allegedly killed in Mengcun, China. Lan Di delivers a finishing blow and Iwao dies in Ryo's arms.

Ryo swears revenge on Lan Di. He begins his investigation by interviewing people about what they witnessed. Just as he is about to run out of leads, a letter addressed to Ryo's father arrives from a man named Zhu Yuanda suggesting he seek the aid of Master Chen, who works at Yokosuka harbor. Through Chen and his son Guizhang, Ryo learns that the dragon mirror taken by Lan Di is one of two mirrors. He locates the second, the phoenix mirror, in a basement hidden beneath his father's dojo.

Chen reveals that Lan Di has left Japan for Hong Kong. Ryo buys a plane ticket from a disreputable travel agency, but when he goes to collect it, he is ambushed by Chai, a member of Lan Di's criminal organization, the Chi You Men. Ryo learns that Chai is connected to the local harbor gang, the Mad Angels, and takes a job at the harbor as a forklift driver to investigate. After he causes trouble, the Mad Angels kidnap his schoolfriend Nozomi. Ryo rescues her and makes a deal with the Mad Angels leader, Terry Ryan, to beat up Guizhang in exchange for a meeting with Lan Di. Ryo realizes the deal is a trap and teams up with Guizhang to defeat the Mad Angels.

Ryo arranges to take a boat to Hong Kong with Guizhang. On the day of departure, Ryo is attacked by Chai. Ryo defeats him, but Guizhang is injured in the fight and urges Ryo to go without him, saying he will meet him in China later. Master Chen advises Ryo to seek the help of a martial artist in Wan Chai, Hong Kong, named Lishao Tao. Ryo boards the boat and leaves for Hong Kong.

Ryo is first seen in Project X Zone 2 in Chapter 5: The Phoenix Mirror.

After Chun-Li and Ling Xiaoyu confront prepare to face off against Juri Han, Ryo runs in after Juri, demanding she return a mirror that he stole from him, which he reveals to be the Phoenix Mirror. Chun-Li asks him to turn back, but he demands that he must get the Mirror back himself, saying that he cannot let the responsibilities that come with it be put onto someone else. Ryo then introduces himself, and states that he knows jujitsu, Chun-Li pieces together that he is from the Hazuki Dojo, and demands that Juri explains what this is about. Juri says she only stole the Mirror and knew nothing of who it belonged to, and then M. Bison, who had been watching the whole time with Saya and Sheath, tells Ryo to give up the Mirror already. Ryo refuses, so Bison sends out some of his viral weapons to assist Juri in killing Ryo, Xiaoyu, and especially Chun-Li.

Eventually, Shinra and the other heroes all find the battle before it can get too heated, and after some quick introductions, Heihachi Mishima realizes that Ryo is the heir to the Hazuki Dojo. Ryo finally reveals that his father, Iwao Hazuki, was murdered, and that the Phoenix Mirror will lead to the killer, which is why he can't part with it. Bison decides he's had enough of this "sentimental nonsense", and takes the Mirror from Juri before levitating himself into a vortex in the sky. So, in order to continue his mission to retrieve the Mirror, Ryo helps Shinra and its rather large party of fighters fight off the viral weapons, Juri, and Sheath.

After the chapter, Chun-Li and Xiaoyu become permanent members of the party, with Ryo as an optional Support Unit.

A student at Yokosuka High School. Son of the head of the Hazuki Dojo, he learned jujitsu at an early age from his father, Iwao. However, on his 18th birthday, his father was killed by a Chinese man named Lan Di who showed up at the dojo.

While pursuing Lan Di in search of revenge, Ryo discovered that this man was a high-ranking member of a sprawling crime syndicate. He also learned of the secret power contained in two ancient mirrors hidden Lan Di's house-the Dragon Mirror and the Phoenix Mirror.

Ryo has a strict but kind personality and is both humble and polite, thanks to the influence of his father who raised him to be self-sacrificing while maintaining proper manners. Although his sense of justice makes him opposed to violence, he has inherited his father's stubborn personality and never changes his mind once he's made a decision.

His high school friend, Nozomi Harasaki, has a giant crush on him. However, since Ryo has yet to pick up on this, and he isn't much of communicator to begin with, he tends to be rather brusque with her.

His theme is a remix of Shenmue's Main Theme.

Ryo uses his Hazuki-Style jujitsu to fight against his enemies. 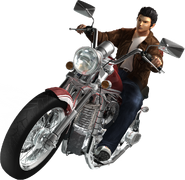