The Nemesis-T Type (ネメシスT-型, Nemeshisu Tī-gata?) is the titular main antagonist from Resident Evil 3:Nemesis. He appears as a recurring boss in Project X Zone and Project X Zone 2. Nemesis is one of the most well known Resident Evil enemies and monsters in horror games.

"S.T.A.R.S!" - a phrase constantly repeated by the Nemesis in Resident Evil 3 which alerts Jill when he is nearby.

Nemesis (aka the "Pursuer") was a weapon created by the Umbrella Corporation. When the zombie outbreak occurred in Raccoon City, Nemesis was dispatched in order to take out the remaining members of S.T.A.R.S (Special Tactics and Rescue Service), mainly Jill Valentine.

Nemesis was a clever opponent, but beyond his intelligence he was like a robot as he possessed no emotions and only did what the Umbrella Corporation ordered him to do.

The true purpose in his creation was to prove that a creature infected with the T-Virus could retain most of its intelligence.

Nemesis was feared by his prey for his inhuman strength and high pain tolerance, such as ignoring gunfire and merely being stunned for a small time by explosives, but what made this Tyrant different from the past Tyrant models was his higher intellect, other than melee combat, this Tyrant was able to use weaponry and firearms to get the job done. These firearms consisted of a mini-gun and rocket launcher made specifically for the Nemesis, as humans were unable to carry them.

He had a network of tentacles that shielded his body and were powerful enough to rip through the human body and infect victims with the T-Virus. The trench coat he wore was bulletproof and explosion-proof, but a little-known fact is that the trench coat acted as a power limiter for him.

In the Resident Evil series, Nemesis possessed three different forms that made him a deadly opponent for Jill to face off against. While in his second form, Nemesis encountered Jill at the factory in Raccoon City. He abandoned his firearms and used long range tentacle attacks in order to fight Jill. Although much slower in this form, he proved to be a troublesome foe for Jill. She managed to defeat him, and thought herself to have killed the Nemesis.

Nemesis encountered Jill for the last time in his third form, where his body had mutated beyond recognition. With Raccoon City nearing its destruction, Nemesis attacked Jill, preventing her escape. Regular ammunition being useless at this point, Jill made use of a rail gun, incapacitating Nemesis, allowing his prey to escape by helicopter.

In the end, Raccoon City was destroyed by an experimental non-nuclear missile, killing him.

Following the rampage of the Tyrant during the Mansion Incident, the pharmaceutical company Umbrella made improvements to their mass produced Tyrant, eventually creating this new B.O.W. specifically intended to destroy S.T.A.R.S. Created by infecting a Tyrant with the "nemesis" parasite, the previously mindless creature became capable of thought and reasoning, as well as the ability to use weapons, such as a rocket launcher. It is also capable of limited speech. In contrast to its bulky appearance the Nemesis-T Type can move extremely fast, often choosing to simply close in and bludgeon its target.

Nemesis makes his debut in Chapter 21: The House of the Dead in Raging Haunted Mansion, a server from The World created by Feydooms based in Chris, Jill and Rikiya's memories, as Boss Unit. Nemesis is resurrected by Feydooms due to Jill's bad memories and proceeds to kill Jill, who had killed him during the Resident Evil 3 events. Also, Lord Raptor appears to take Nemesis to his personal army, however, he is defeated and retreats from the server. Later, he reappears in Chapter 26: Warriors Beyond Reality in Schlafen Celeste, along with other B.O.W.s. However, is defeated and retreats from the ship.

After a long time, he appears in Chapter 32: Dead Rising Again in Willamette, along with a horde of B.O.W. and as part of Lord Raptor's army, however, he is destroyed. After his destruction, Chris thinks this is over.

The Nemesis-T Type returns in Project X Zone 2, first appearing in Chapter 11: Boulevards of Belligerence, having been brought on board the Queen Zenobia by M. Bison along with several other B.O.W.s and accompanying Baby Bonnie Hood in in the Main Hall. It fights the group of heroes present but is defeated, after which it retreats.

The Nemesis-T Type's second appearance is in Chapter 16: Thicker than Water alongside the Ustanak, having been brought to the world of the God Eaters by M. Bison. It fights the group of heroes at the Ice Blue Canyon but is defeated, though it manages to retreat again.

The Nemesis-T Type's third appearance is in Chapter 22: The Demon's Within, having been summoned to Tarqaron by M. Bison with several other B.O.W.s. It engages the heroes in battle once again and is defeated, this time dying for good.

Despite its destruction, a second Nemesis T-Type appears in Chapter 32: Arisu in Marvel Land, having been brought to the amusement park Marvel Land by B. B. Hood and Lord Raptor, with B. B. Hood revealing she took it after she ended her contract with Shadaloo. After it is defeated, it escapes.

The Nemesis T-Type's final appearance is in Chapter 38: Undying Souls, where it appears from inside the Millennium Tower alongside the Ustanak and Tyrant B.O.W.s. After it is destroyed and M. Bison is killed, the B.O.W. plant from within the tower is shut down, thus ending the threat of the Nemesis-T Type for good. 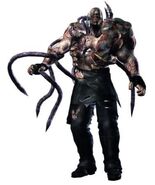 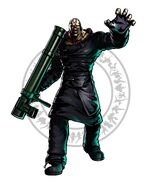 Nemesis in Ultimate Marvel vs. Capcom 3

Nemesis in Marvel vs. Capcom Infinite