"Indeed. the Portalstone is ours. All that remains is to release its powers at the right place and time."
—Meden Traore, Project X Zone

Meden Traore (メーデン・トローレ) is the real leader of Oros Phlox and the secret villain of Project X Zone. He is the one who had the Portalstone stolen from the Protagonists and is the final boss in the game.

The boss of the aversarial organization "Oros Phlox", invaders from another dimension. Along with his wife "Due Flabellum", who is another leader of the group, and the beast-faced "Belanos Brothers", he uses powerful magic to threaten the very existence of the world. His hair is surrounded by an aura that makes it look like it is burning, and he has the power to lead a horde of monsters.

In the fight against Meden, he has a very wide hit box making it easy for him to target allies that aren't even close to him. However, this is offset by the fact that he stands in one location making it easier to attack him with multiple allies at once. He also does not need a full 100% XP gauge to execute attacks so this can be quite tricky to deal with. 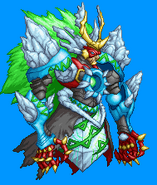