Lord Raptor, also known as Zabel Zarock (ザベル=ザロック Zaberu Zarokku) , is a zombie rock star from Capcom's Darkstalkers series and one of the ten playable in the first entry. He appears as an Enemy Unit in Namco X Capcom, Project X Zone, and its sequel.

Lord Raptor was an Australian rock star who released six albums. Although originally an unknown during the release of his first album, Oral Dead, Raptor became big in Australia with the release of his second album Punishment which went on to sell 200,000 copies through word of mouth alone. During his last concenrt, 100 fans were drained of their blood and when found appeared to have happy expressions on their faces. Raptor had turned into a skeleton and died as well. After his death, his sixth and final album Devil was released and contained the song "Sacrifice", which was played during Raptor's live suicide.

After the young rocker's death, a strange leather covered book titled A Chapter of Tolagido was discovered in Raptor's home. The book, written in Hebrew, discussed the realm known as Makai and many of the lyrics to his songs were found. One chapter of the book, titled "A Curse to Give Sacrifices to the King of Makai", revealed where Raptor had found the lyrics to his last song, "Sacrifice". Raptor came to understand that he had been brainwashing his victims and had started a curse with his own music in order to receive sacrifices.

Once an extremely popular Australian guitarist who was known as the "God of Metal", he sacrificed 100 of his most crazed fans to the Maki Emperor Ozom, becoming a zombie by choice and obtaining awesome power.

After Emperor Ozom launched an attack on his enemies and was subsequently destroyed, Lord Raptor quickly set his sights on seizing the new Emperor's throne.

He fights like a true rock star, throwing out shockwaves with his guitar or charging himself full of lightning and plunging into the fray.

Lord Raptor is a recurring antagonist of Namco X Capcom, Project X Zone, and its sequel, with his purpose being allying with powerful beings such as Druaga, Jedah Dohma, or Pyron and steal their powers, however, due his greedy attitude and his body being unable to store more power he ends up exploding.

"Information to be added later"

He makes his debut in Prologue 5: Dead Re-Rising, who along with a zombie horde assault the Bermuda ship and attack the heroes under Jedah's orders, but is defeated and retreats from the ship.

Later, he reappears in Chapter 10 in the Majigen, who is talking with Jedah about his role in his alliance with him and retreats from the place. He then appears in Demitri's Castle with other Makai's demons and it seems Heihachi allied with him in order to obtain more power with just fight the heroes, but both are defeated and he retreats from the castle. Much later, he reappears in Chapter 16: Detestable Golden Sunny Demon, who is talking with Astaroth and recently he helps him to kill the heroes in Chapter 17: Operation Crackdown in Gain Ground. It's revealed that Lord Raptor has been allying himself with other villains for building his personal army, his purpose here is buying time in the heroes for detonate the statue bombs who will create a dimensional vortex that will cause the space where they are collapsing in just 15 minutes, after his explanation, he invokes monsters from other dimensions. However, he is defeated and he wonders why he can not save Hsien-Ko, but he seems does not care and retreats from the realm.

Much later, he reappears in Chapter 21: The House of the Dead in Raging Haunted Mansion, a server from The World created by Feydooms based in Chris, Jill and Rikiya's memories. He along with zombies attacks the heroes, also that Lord Raptor is interested in Nemesis and he wants him to be part of his personal army, however, he is defeated once again and retreats from the server. After a long time, he reappears in Chapter 32: Dead Rising Again in Willamette, it's revealed that he came from Bermuda ship, were the other heroes ended, because Mii accidentally transported them, plus he had gotten Nemesis for his army, along with his hordes of B.O.W., however he is defeated and retreats quickly from the place, because his time's up for now.

Following his defeat at the end of Project X Zone, Lord Raptor remained trapped in the Fetus of God where he eventually got swallowed. In Chapter 13: The Second Coming of Valkyrie, he tries calling for help but his pleas go unnoticed by Sheath and Ouma, who came for the golden chains. After the heroes arrive, Raptor tries to convince them to help set him free by promising to tell them about what he saw Sheath doing. After he is freed though, he accidently reveals he actually didn't see anything because he couldn't, but manages to hold off the angry heroes by telling them what he heard Sheath do with the chains. Nevertheless, he realizes how outnumbered he is, but Pyron's sudden arrival prompts Raptor to align himself with him. After he is defeated, he flees, but promises to find more power.

Raptor's second appearance is in Chapter 18: Escape from the Gangs of New York and teams up with Ranmaru and Dokurobo to acquire the shard of the Demon Blade within the Little Lip Theatre by providing a group of demons carrying bombs to help them bust into the theatre. He also reveals that Pyron is present but in a different location with golden chains, which is Paris. After he is defeated, Raptor declares that he is done following Pyron and sets off to do his own thing.

Raptor's next appearance is in Chapter 26: The Terror of Death Approaches with an army of B.O.W.s including the Ustanak. He says that he came because he heard Pyron found something interesting, so he came to see for himself. He even reveals he picked up Nelo Angelo along with several other demons to help him. After he is defeated, he retreats, promising to find power another way.

Raptor's fourth appearance is in Chapter 32: Arisu in Marvel Land, where he reveals he hired Baby Bonnie Hood to help him steal the Golden Seed from Kamuz, even managing to find out about the seal around the seed that needs to be lifted. After he is defeated, he decides to find something equally as powerful as the Golden Seed and retreats, with B. B. Hood ending their contract after her defeat.

Raptor's fifth and final appearance is in Chapter 38: Undying Souls where he confronts the heroes outside the Millennium Tower. He reveals that portals to other worlds are opening everywhere in Makai. He also claims that he plans on doing something for Makai by revealing that something is draining the realm of its power, which they deduce is M. Bison's Pyscho Drive, but when he announces his plan to claim the power for himself, the heroes swear to stop him. He does ask M. Bison what he plans on doing with all that power, even citing Jedah Dohma's big plan from last time, but he claims ignorance. After being defeated, Raptor desperately tries to absorb all of the magical power at once, but ends up blowing himself up once again, and this time with no head left behind. 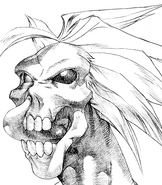 In his human form with Le Malta