Kazuya Mishima (三島一八, Mishima Kazuya?) is a major character in the Tekken game series and a playable character in Project X Zone 2. He first appeared in Namco x Capcom in his Devil form.

He was trained by his grandfather, Jinpachi at the young age. But due to his father's harsh actions and his weakness, he was thrown into the cliff by his father as he sold his soul from the Devil while in his bloodied state.

In the first Tekken game, Kazuya enters the first tournament who is now became an undefeated champion to fight against his father Heihachi for revenge as he gains a thick scar on his chest due to being fall into the cliff. After winning the tournament, Kazuya retaliates by throwing his father Heihachi in the edge of the cliff where he was thrown by him as a child as he smiles in delight.

Two years later, Kazuya became the head of the Mishima Zaibatsu instead of correcting his father's actions, he made the Zaibatsu into a more corrupted organization. He created a King of Iron Fist Tournament 2 after hearing his father Heihachi, survives from the fall. During the second tournament, he and fellow fighter Jun Kazama cross paths and became intimate which he mysteriously impregnates her. He and his father clashed in the final round of the tournament as he was defeated by Heihachi due to an internal struggle between both his good and bad side as his unconscious body was carried by Heihachi and threw him into the mouth of the volcano.

In Tekken 3, he along with Jun appear in the arcade opening as Jin's parents on Jin's mind.

His remains are later found by G Corporation a rival company which he was resurrected. He decides to use his body for their research and learns how to control the Devil Gene. Therefore 21 years later, several Tekken Forces are infiltrating the base in Nebraska where his remains are preserved. He himself manages to take them down and warns Heihachi for causing all the trouble as the latter makes the King of Iron Fist Tournament 4 to lure him out.

During the fourth tournament, Kazuya has to face his son, Jin for the first time but his opponent ends up being captured by the Tekken Forces and faces his father again at the eight round but ends up defeated. Heihachi takes him to Hon-Maru and to see his son Jin who is bound up in chains. However, Kazuya was possessed by his devil form, Devil Kazuya as he demonstrates his telekinetic abilities to knock Heihachi down. Devil Kazuya tries to absorb the other half of the Devil Gene in Jin's body as the latter bore tattoos in his chests and arms after engulfing a purple miasma. However, he is unable to absorb due to the Kazama blood that was running through his veins and it was restraining his absorption as Kazuya manages to break free from the Devil's control as he and his devil form became one as he wakes his son Jin.

Jin wakes up after his dream where Kazuya evilly taunts him to hate him as his nightmare, he manages to release himself by breaking the chains in both of his arms as purple miasma engulfing at his body. He angrily fights him as Kazuya was beaten by his own son in defeat.

After Jin wins the fourth tournament after he spared his grandfather's life and flew away in his devil form, Kazuya and his father, Heihachi are ambushed by the Jack-4s sent by G Corporation which he makes an unlikely alliance towards his father. After beating most of the Jack-4s, He has an opportunity to threw his father to take down most of them as he leaves Hon-Maru to escape by transforming into Devil Kazuya and flew away.

Despite not winning the fourth tournament, he becomes angered due to the betrayal of G-Corporation who revived him. He enters the fifth tournament where it was sponsored by his grandfather, Jinpachi Mishima who was freed in the explosion at Hon-Maru.

Despite not winning the fifth tournament where his son Jin wins the third time in the tournament. Kazuya found the people from G-Corporation who has plans to kill him which he swiftly kills them all including Emma Kliesen (Leo's mother who made Leo to enter the sixth tournament for an exact revenge against him.). He became the head of G Corporation as the people think of their organization as their savior. He uses this to face off against his son Jin who became the head of the Mishima Zaibatsu who made the company to create a global war which his plans is to awaken the beast named Azazel by the use of negative emotions to awake him in order for himself to destroy the beast just to cure for his Devil Gene. He initially put a bounty on his son's head making Jin to make another King of the Iron Fist Tournament so that he would settle the score with his son.

During the sixth tournament, he faces off his half-brother Lars Alexandersson in the outside of Azazel's Chamber where both had punched themselves with their fists to their faces. Kazuya notices that Lars is related to them as he merely leaves the premises.

In Tekken 7 and its updates, Kazuya is still the head of G Corporation and continues to have a war against the Mishima Zaibatsu which is now reclaimed by his father Heihachi after Jin's sudden disappearance due to his sacrifice to destroy Azazel and ends up in a comatose state. Heihachi creates another King of the Iron Fist Tournanent in order to lure Kazuya one last time as part of his strategy but they are unaware that Kazumi Mishima, Heihachi's ex-wife and Kazuya's mother had already spoken to Akuma who he promised to pay her debt by killing both for their absolute power. During the events of the game, Kazuya faces off against Akuma at the top of G Corporation Tower only to be interrupted by his father Heihachi who faked his death after being defeated by him to expose his devil form and destroying the tower using a death beam from their satellite. Kazuya survives the ordeal and retaliates by using a Devil Blaster to destroy the satellite. Later, he and his father Heihachi are now fighting each other at the volcanic pit which they exchange their blows. Kazuya has the upper hand despite his father beats him twice. Knowing it is not enough, he transforms into a more powerful devil form with three eyes in each side of his wings and the red scar on his chest develops a fourth eye. Heihachi was waiting for this fight as he uses his remaining energy to face him. Despite his efforts, Kazuya prevails but Heihachi does not given up the fight and he manages to knock him off with his powerful blows causing him to revert to his normal state but is worn out. Both men continue to exchange blows until Kazuya fatally kills his father once and for all with a single punch embedded with purple miasma. Kazuya then throws his father's corpse into a river of magma. Therefore, Akuma reappears as he quickly transforms into a devil once again as both men unleash their powers and was collided as the outcome of their fight is unknown. In the post-credit scene, Jin mentions him about the devil's blood inherited from him and he is the only one can kill him.

The former head of Mishima Zaibatsu. He is the son of Heihachi and father to Jin.

When he was a child, Heihachi drilled him in Mishima Style Fighting Karate, until one day Heihachi dropped him off a cliff. Though severely injured, he survived, but he grew to loathe Heihachi as a result. When the first King of Iron Fist Tournament was held, he defeated his father and seized control of the Mishima Zaibatsu.

In the second tournament, Heihachi took revenge and threw him into a volcano, which awakened his Devil Gene and saved his life. He then had G Corporation study his devil transformation, and in time learned to control it.

A cold and ruthless man, he would gladly kill his own flesh and blood in order to perfect his devil power.

Kazuya uses his Mishima Style Karate to take down his foes along with his Devil form. He fights alongside his son Jin, although both aren't above trying to kill each other along with their enemies.

Kazuya's theme is a remix of "Burning", the opening theme of Tekken 6: Bloodline Rebellion. 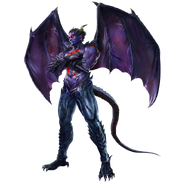