Hotsuma (秀真, Hotsuma?) is the main protagonist of Shinobi (2002) and is a playable character in Project X Zone 2.

Hotsuma was born to one of the Oboro households. He would be adopted into the clan leader's residence along with his brother in law, Moritsune. The oldest sibling Moritsune being the stronger of the two, Hotsuma looked up to him as a superior shinobi of the Oboro Clan. Together with his brother, and their childhood friend Ageha, Hotsuma trained under his foster parent and sensei, Kobushi, the Oboro Master Ninja at the time in Oboro Ryu Ninjutsu (朧流忍術; Ninja Skills of the Oboro School). Marveling at Moritsune's prowess he trained hard to be just as skilled as his brother.

However, when the trio were playing, they found the Oboro family Temple and went inside, where the found the Demon Blade Akujiki (妖刀「悪食」literally Demon Sword "Evil Eater"), a katana that is known for gaining its power by absorbing the Haku (魄 The negative energies of the spirit) from those it slays, but left unfed would drain the life energies of the owner, cursing them to a life of slaughter.

Ageha attempted to claim the weapon as her own despite Hotsuma's warnings, but the sword reacted to her greed and attempted to claim her soul. Moritsune sent Hotsuma to retrieve their master, while Moritsune struck himself across the face with Akujiki; saving Ageha's life, but cursing himself for life in the process.

Kobushi told them the legend of the sword and the two siblings realized their grim fate; one would preside over the Oboro Ninja and the other would die by his own sibling's hand as a sacrifice to Akujiki. For ten years the brothers trained hard for the ritual.

The ritual began on a fulll moon in the cherry blossom grove of Kan'Ei Shrine. During the savage ritual Moritsune held back on purpose, refusing to condemn his brother to Akujiki, and took the blow. When Hotsuma was told by Moritsune to complete the ritual and claim Akujiki, Hotsuma in his heartbreak refused. But Moritsune threw the sword to him. Before he dealt the death blow to Moritsune, his brother told him

And with a heavy heart, Hotsuma killed his brother, becoming the head of the Oboro ninja. However, Hotsuma in his grief and self loathing left the Oboro Village, unable to deal with the shame and memories of killing his brother, and worked for the Shinobi Agency.

Four years later, an earthquake struck Tokyo and destroyed its capacity to function as the capital city. Soon after Hellspawn attacked the Oboro Village, and every Ninja there had perished. Soon after, a giant golden castle appeared in what was once known as the Waterfront City.

Gripped by his failure as a leader to protect his brethren, and determined to avenge his fallen compatriots, he flew into the ruins of Tokyo. There he was attacked by a mysterious masked Ninja named Aomizuchi on many occasions and Akujiki's seal was broken.

To Keep Akujiki under control, Hotsuma slew every Hellspawn and undead Oboro in his wake, and claimed their souls. Eventually he learned that his own brother Moritsune was being manipulated as well. While making his way to Kan'Ei Ji, he encountered his former friend Ageha, who became a Rogue Ninja after Moritsune died. She reveals that she broke the seal of Hiruko Ubusuna, an evil sorcerer that the Oboro clan had defeated in the past, in a bid to claim vengeance on the Oboro and revive Moritsune. Hotsuma defeated the traitorous kunoichi, but watched in horror as his undead brother, possessed by the Hellspawn Lord Aomizuchi murdered Ageha and became a demi-devil. Enraged he killed the demon and exorcised it from Moritsune. Happy to see his brother again, Hotsuma vows to his brother to avenge the Oboro.

Hotsuma made his way through the Golden Palace until he confronted Hiruko, who revealed he made Hotsuma butcher his undead clansmen and slaughter the Hellspawn with the intent to create a perfect Haku inside Akujiki and claim it for his own. Hotsuma fought Hiruko to the death, and slew the sorcerer. Hotsuma remembered something Ageha told him ; the duel four years ago wasn't to decide the clan's leader but to keep Akujiki's seal reinforced by feeding it a spirit. Hotsuma blamed the evil blade for all of his suffering, and aware that if he lived he'd be forced to serve Akujiki, he chose death and resolved to destroy it. Hotsuma perished as the Golden Palace is reduced to rubble, leaving the Akujiki behind.

The young leader of the Oboro clan of ninja. Wielding the cursed sword Akujiki, he works in secret under direct orders from the government.

Although once kind and gentle, he now rarely shows emotion, coming across as cold and distant.

In accordance with the laws of his clan, he became leader by battling and defeating his brother Moritsune, the other candidate. The laws of the clan also forced him to put Moristune to death, leading Hotsuma to close himself off emotionally.

As one would expect from the leader of a clan of ninja, he possesses powerful ninja arts and unmatched skill with a sword. His Stealth Dash technique is so fast that it leaves afterimages behind, and even for other ninja, it is almost impossible to see.

Along with his Akujiki blade, he also uses various ninja arts, tools and even a ninja dog, Yamato. He is partnered with Strider Hiryu.

Hotsuma's theme is "Patience" from Shinobi. 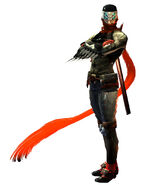