"There's only one thing that's real about this world. And that's us the players! Getting stronger and defeating your opponent; those are the ways that all of us keep connected! That's the way this game is played!"
— Haseo —

Haseo (ハセヲ, Haseo?) is a the main protagonist in the .hack//G.U. series and a playable character in Project X Zone 2. He is an Adept Rogue known as the "Terror of Death" (死の恐怖, Shi no Kyōfu). He is in search of the PK Tri-Edge.

Haseo's player, Ryou Misaki (三崎亮), is a sophomore student attending a famous private high school. He lives alone in Tokyo, and his dad owns a major company. He visits Shino, who is in a coma, at the hospital everyday. He decided to play The World R:2 after talking to a friend who used to play its previous version, The World. He was once the player behind Sora, but lost all memory of it and The World after being Data Drained by Skeith. Meanwhile his character data continued on as an AI and eventually reunited him as Skeith.

After Haseo is saved by Ovan, he is invited into the Twilight Brigade guild where he first met Shino. Over time, he developed a bond with her as the days went on. During a battle between the Twilight Brigade and a rival guild TaN, Ovan mysteriously went MIA. After the guild fell, the two were meeting at Hulle Granz Cathedral when unexpectedly, Shino fell into a coma after being Data Drained by Tri-Edge. In order to confront Tri-Edge, he enters the Forest of Pain event and meets The World creator Harold Hoerwick who gives him great power.

Over time, he became a ruthless PKK, "The Terror of Death" for killing 100 PKs (Player Killers) at once. After meeting Moon Tree members Atoli and Sakaki, he receives a mail from Ovan, who was missing for about a year, that explains that Tri-Edge will be at Hulle Granz Cathedral; the scene of the crime.

At the fated place, Haseo and Tri-Edge fight a rough battle. But Tri-Edge unleashed his Data Drain, knocking Haseo unconscious. When he recovered...he discovered that his stats were reset, forcing him to start over from scratch. He meets with many characters, including Atoli, a member of Moon Tree who looked similar to Shino, Yata, the leader of the GU guild, and Antares, the former emperor of the Arena. As he continues searching for Tri-Edge, he joins GU in hopes of finding information on Tri-Edge. He manages to unlock the Avatar Skeith, a potential Yata calls "Morganna Factor", during an Arena battle against Bordeaux.

As he continues solving the mysteries of AIDA and Tri-Edge, he eventually loses his power during a fierce battle against Ovan, in which that he was the True Tri-Edge and not the one Haseo fought earlier. Haseo then faces his Avatar in a mirror image of his own form, and after overcoming his doubts, he evolves into a new Xth Form. After fighting his way through the revived Cubia's shell, he and his friends stopped Cubia once for all...at the price of Ovan's life. After some time passed, Shino awakens from her coma and asks to meet Haseo at the Cathedral. After telling her decision to rebuild the Twilight Brigade, she also explains that while in her coma, she witnessed everything through Ovan. As Haseo is now torn between Atoli and Shino, the latter told him to be honest with his feelings...and he rushes out to see Atoli.

A PC in the sequel to The World, The World R:2

Back when he first started playing, one of his guildmates, a girl named Shino, was PKed and turned into a Lost One by Tri-Edge, a PC who looked identical to Kite. Burning with anger, Haseo set off to find Tri-Edge and exact revenge. As he gathered new companions, he learned about AIDA, an AI data anomaly not bound by the rules of the game world, and he discovered that he possesses a special power known as an Avatar.

For a time after Shino was lost, Haseo kept strictly to himself and avoided contact with other players. But once he met Atoli, a PC who looks like Shino, and Kuhn-- who went out of his way to warn him about the dangers of Avatars--he learned the value of using strength to protect rather than attack. In time, his PC evolved through Job Extend quests, reflecting Haseo's own growth as a person.

Together with his friends, Haseo went on to learn about the truth about AIDA that threatened to cast the The World into Chaos. He is socially awkward by nature, and his contemptuous attitude still comes out at times, but inside his heart is slowly becoming warmer and more compassionate.

Haseo uses the same moves from GU, including Lotus Flower, Gale Blade, and Charge Slash. As well as the Twin Blades, Broadsword, and Scythe from his Job Extensions, he can use his Avatar when he recovers it later in the game. 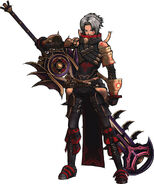