This article is a stub. You can help Project X Zone Wiki by expanding it.

Felicia (フェリシア Ferishia) is a character from the Darkstalkers series that appears as a pair unit in Namco X Capcom and a solo unit in Project X Zone 2.

Felicia is a catwoman who was taken in and raised by Sister Rose in an orphanage, who gave her the name Felicia from the word "felicity". When the Sister passed away, Felicia left her town hoping to be a musical star. Despite facing some difficulties, the cheerful and innocent Felicia never lost hope and pursued her dream, becoming a famous musical star alongside other catwomen and later working on an orphanage to make others happy.

Denizen of Makai, she is a member of the catwoman race and has both human and feline characteristics.

As a young child in an orphanage, she watched musicals on TV and fell in love with the idea of becoming a beautiful star, so she left home and decided to travel around the world. Before long, she became the star she dreamed of. After that, she built her home orphanage called "Felicity House" where lonely orphans could lead a happy life, where she works as a "musical sister".

She has great love and respect for Sister Rose, who she calls "Mama" and who cared for her when she was young. Sister Rose was her main motivation for establishing her own orphanage.

Her personality is bright and sunny. She believes, as Mama told her, that you have to go out and seize your own happiness.

As a result, she is always positive and strong and never gives up on her dream even when she suffers a setback.

Felicia fights with her moves from the Darkstalkers series, including Dancing Flash, Delta Kick, and Rolling Scratch, with Blanka's Electric Thunder and her final attack is one of her Mighty Combos from Super Gem Fighter Mini Mix.

Her theme is a remix of "U.S.A. Stage" from Night Warriors: Darkstalkers' Revenge. 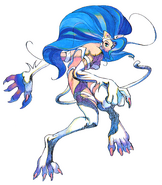