"The boundaries are faltering. There's no distiction between anything any longer. Space and time, past and future, life and death."
—Due

Due is an original antagonist in Project X Zone.

Of all the three original antagonists, she is the second-in-command of Oros Phlox and Meden Traore's wife.

The leader of the adversarial organization "Oros Phlox", invaders from another dimension.

Along with the beast-faced "Belanos Brothers", she uses her powerful magic to threaten the very existence of the world.

She is never suprised, always at ease and speaking with a laid-back tone, and generally looking down on anyone she talks to.

Difficult to pin down, she often phrases thing as questions.

Due Flabellum is the powerful leader of Oros Phlox, the manifestation of Portalstone's "will". She makes his debut in Chapter 5: The God Eaters at the beggining and the end of the chapter. She is talking with Belanos Brothers about Mii as his failure in kidnapping her and its recent location, so she will go where the heroes greet them personally and also carry out an "experiment". Later, she appears with Saya on top of a skycraper in Shibuya where they talk about the alliance between Oros Phlox and Ouma. She reappears in Chapter 7: The .hackers who is looking for Ciseaux for make an alliance with him.

Soon, she appears in Chapter 9: Justice Over Evil as Boss Unit in Ginza from the year 1920 from Sakura Wars's world (a different time axis from the original world). She is surprised at how the heroes came from cyberspace to a another past and introduces herself to the heroes and his goal is to kidnap Mii, as also talks about that she was born from "who" seeks to merge all the boundaries lines between worlds and eras. However, she is defeated by the heroes not before knowing that they are able to make the Koryuji clan and retreats from the city.

At the end in Chapter 13: Valkyries' Adventure, she prides herself in seeing that everything that Oros Phlox has planned is a success. Later, she reappears in Chapter 15: The Gain Ground System who seeks to go to Makai with Aya-me's help. Despite his defeat and his plan remains successful, she declares to need Mii's power and goes to the Makai. Much later, in Chapter 20: The Maverick Hunters, she reveals the truth about the revived villains. She mentions that because the boundaries are faltering, so there no distinctions beetween time, space, life, death. After his explanation, he summons Vile for destroy the heroes, including X and Zero, also, she feels that the power of Mii is flourishing. However, she is defeated once again and retreats from the cyberspace.

She then reappears in Chapter 24: Maidens of the Battlefield in Marvel Land, she tries to using the magic circle of the place to summon Selvaria, Juri and Saya and his minions to defeat the heroes. However, she is defeated, so she retreats not before knowing the utility of the magic circle. At the end of the chapter, Meden Traore, his husband, asks Due if things go as planned, even though she says there are no irregularities in the plan, the Portalstone still remains unstable and Mii has not yet awakened his powers, so he orders Drei and Ein to keeping observe her, Meden wants to undo the seal of the Portalstone as soon as possible, so Due proposes to "lend a hand" to the heroes to awaken the Portalstone.

Much later, at the end of Chapter 30: City of Mercy she along with Belanos Brothers, devise a plan to awaken Mii's true power to release the Portalstone's seal, as seen in Chapter 31: Key to Another World. She enters in Koryuji's mansion using his things and eating his meals to provoke Mii and invokes a lot of Ouma and Oros Phlox's minions only as bait and proceeds to attack the heroes, when she is defeated, she will wait the results of his plan and retreats from the place. After defeating the enemies, Due plans are successful, because Mii's power awakens and transports the heroes to different places by mistake. 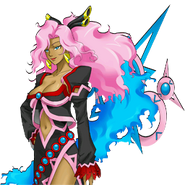 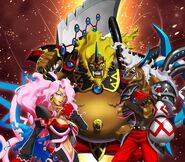 Artwork of Due, with Eins and Dre
Add a photo to this gallery
Retrieved from "https://projectxzone.fandom.com/wiki/Due_Flabellum?oldid=18235"
Community content is available under CC-BY-SA unless otherwise noted.