Dokugozu (毒牛頭, Dokugozu?) is a member of Ouma and is one of Saya's two henchmen. He debuted in Namco x Capcom. His name is Japanese for "poison cow head" and he is based off of Cow-Face, one of the two guardians of Diyu (hell) in Chinese mythology.

A member of Ouma and one of Saya's henchmen, he is a monster with the head of a cow.

He possesses a wild personality and speaks in a rough manner, though he addresses Saya as "ma'am".

As his external appearance suggests, he is powerful and tough, attacking with swings of his poison axe "Dokudofu" or by breathing out poison mist.

Dokugozu is one of two Saya's bodyguards who makes his debut in Chapter 2: The Fighting Vipers at the end of the chapter. He then with Dokumezu reappear in Chapter 4: Arisu in Wonderland in Shibuya as Boss Units, but they are defeated by the heroes and retreat from the city. Much later, he along with Drei Belanos appear in Chapter 16: Detestable Golden Sunny Demon with Ouma's minions, among them, Byakuya X. Despite his defeat, he fulfilled its mission to test the Byakuya X's capabilities, so he retreats from the realm. He then reappears in Chapter 23: Ulala's Swingin' Report Show in Transport Merciful Goddess, a server from The World created by Feydooms, based on Zephyr, Leanne and Vashyron's memories, along with Dokumezu, Saya and Ouma's minions. However, he is defeated once again and retreats from the server. Much later, he appears in Chapter 31: Key to Another World in Koryuji's mansion along with Belanos Brothers and Dokumezu, before fighting, he talks to the Belanos Brothers about Saya and Due and they compete for which one is better, when Saya appears beside the heroes, he along with his partner, lose respect to their mistress for their "betrayal" and proceed to attack them, but is defeated and he reveals the alliance of Oros Phlox with S.I.N. and retreats from the place. 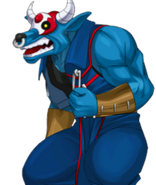 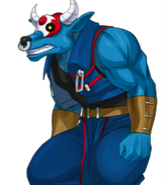 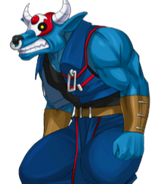