Chrom (クロム, Kuromu?) is a major character from Fire Emblem Awakening and a playable character in Project X Zone 2.

Descendant of the Hero-King Marth and prince of the Halidom of Ylisse, a country that worships the divine dragon, Naga.

He wields the legendary sword Falchion, a weapon passed down through the line of kings. He is also the captain of the Shepherds, a militia that he established to defend the kingdom.

He is currently fighting to defeat the Risen that have appeared in each region and to prevent the ambitions of the Grimleal. This dark cult is dedicated to the Fell Dragon Grima, a monster who promises to bring about the end of the world.

Chrom is a brave youth with a strong sense of justice and deep affection for his allies. He was initially shaken after learning the truth about Lucina, but now he views her simultaneously as a trustworthy companion and as his beloved daughter.

He trains daily with his sword, which often results in considerable destruction to the general vicinity.

His theme is "Conquest (Ablaze)" from Fire Emblem: Awakening. 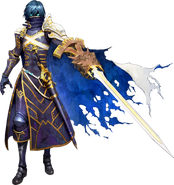 Chrom in his swimsuit from Fire Emblem Awakening's Beach DLC 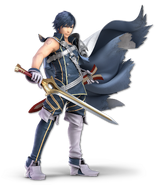