Aty (アティ, Aty?) is a character from the Summon Night series and a playable character in Project X Zone 2.

Originally from a poor village, she joined the Empire's army in order to protect those she cared about. Her talents got her through the ranks, but a spy she was sent to watch over was released on her permission only to find that said spy was holding a noble hostage. Because she was responsible for this, she went alone to rescue the noble and nearly died in the attempt. She resigned shortly thereafter and became a private tutor for the son of the same noble she rescued.

While on the way to another city, they were attacked by pirates and caught in a storm. She was tossed overboard and nearly drowned, but was saved by a mysterious voice who gave her power in the form a magic sword: Shartos. She found her student safe and sound on an island inhabited by summoned beasts. After earning their trust by protecting the island from the army, she opened a school at the request of the Oni's princess to teach the island's children about the outside world. Since then, everyone started calling her teacher, even the adults.

Aty used to be an elite soldier in the Empire's army before leaving to become a private tutor for a single child. When she embarked on a boat trip with that child to the regional capital, their ship was attacked by pirates and she was tossed into the ocean. There, a mysterious voice guided her to acquire the power of the magic sword Shartos, which enabled her to rescue her pupil.

In time, she and her charge drifted onto an unknown island, where they met the native inhabitants pirates, and the guardians of the island's village. Soon she also came to learn about the mysterious relic known as the Evocation Gate and the secrets about her new sword.

Aty is naturally polite and gentle, and sometimes she seems unaware of the ramifications of her actions, but she is also devoted to her pupil and friends and will do anything she can to protect them.

Her main theme is an instrumental version of "The Sun is Calling" (Taiyou ga Yondeiru), the opening theme of Summon Night 3. Another of her themes is "A Heart to be Clear", from the same series.

She summons various Summoned Beasts while attacking with her sword before unleashing Shartos's power to blow the enemy away. 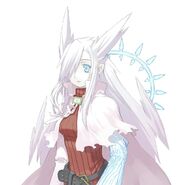